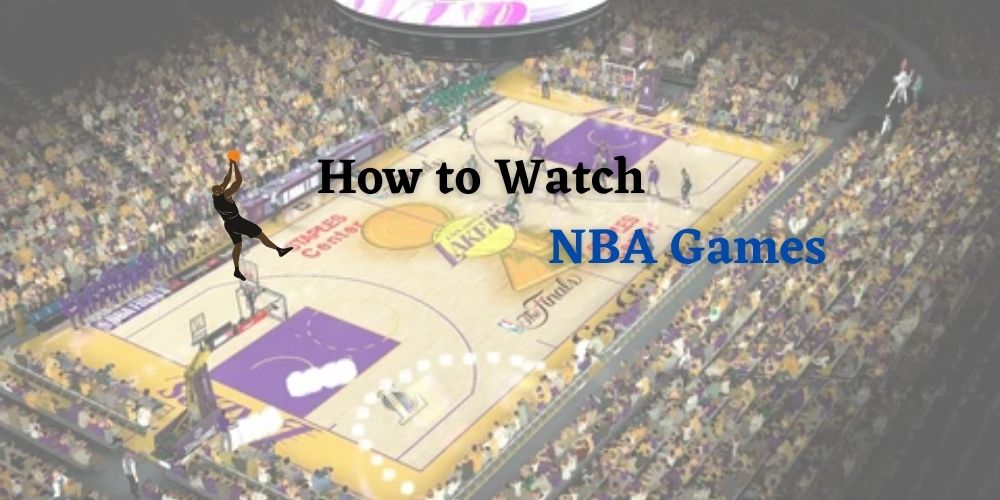 NBA remains under discussion around the year. It is not only famous in the USA, but people around the world keenly follow this sport. It is a series of matches comprising the NBA Preseason, NBA Playoffs, NBA All-Star Games, and NBA Finals. Besides this, it has one of the event games that happens every year to bring new talent and make NBA a source of ultimate fun. The NCAA College Basketball is the root that leads to the NBA selection of quality players in the USA.

In this article, I am going to share an ultimate guide to watching NBA in the USA, outside the USA, the TV Channels, and the online streaming services enabling you to watch NBA anywhere in the World.

No Matter where you are currently residing you can still catch live NBA games in action:

Here is the step wise wayout:

How to Watch NBA TV

Even though it is the era of online streaming, old-school fans love to watch NBA on TV channels. Besides this, Satellite TV is also there to access the official broadcasters of the NBA in the USA.

ESPN is one of the official National broadcasters of the NBA in the USA. It majorly broadcasts Wednesday and Friday Games. However, sometimes you can watch the weekend games on ESPN. You can access ESPN Tv by following methods in the US.

The NBA’s package (under the NBA on ESPN branding) generally begins with Christmas Day games. It was followed by a series of Saturday night and Sunday afternoon games throughout the rest of the season. It also involves weekend Playoff games and all NBA Finals games.

In addition to Saturday Night Football in primetime, ABC regularly broadcasts an afternoon doubleheader on Saturdays during college football season.

Until the 2002–03 season, TNT broadcast NBA games on numerous Tuesday nights. After TBS opted out of NBA coverage due to the league’s contract renewal with Turner Sports, the weekly telecasts were shifted to Thursday nights in the 2003–04 season.

It also airs the NBA regular season games, typically aired as a doubleheader on most weeks.

The All-Star Game has been simulcast on TBS since 2015 to drown out any in-house rivalry; however, unlike previous TBS/TNT simulcasts, it is not specifically acknowledged in promotional advertising, and only TNT’s airing of it is noted.

Cable: Available on all Cable Systems

NBA TV provides daily basketball news, besides the programs on the lives of individual basketball players. Besides this, it also airs documentaries about a certain NBA team during the season and archived broadcasts of popular games.

NBA TV broadcasts at least 90 regular season games, as well as some first-round playoff games, four days a week during the NBA season (primarily on Mondays, Tuesdays, and Saturdays, though occasional Wednesday, Friday, and Sunday games may air if ESPN does not have rights to coverage on those nights).

It also broadcasts its own NBA Draft coverage.

Because NBA TV (although being owned by the league) does not have exclusive broadcast rights to any of its games, live games on the network are subject to local blackout restrictions.

The local rights holder also televises NBA TV games for each team, either a regional sports network or a broadcast television station.

The score box displayed during NBA TV’s game coverage (formerly located in the lower-left-hand corner) was replaced with a banner format angled horizontally across the screen beginning with the 2012–13 season.

On TV, On Mobile Apps, Online/Without Cable, Outside the US

How to Watch NBA on Mobile Apps

There are the following Mobile Apps on which you can stream NBA games:

You can watch NBA games on ESPN mobile App. This app is available for the users of the USA. You need to check out its prize, buy its subscription, and then enjoy watching the NBA games without hassle. Keep that in mind; it will only broadcast those games that come under the window of its channel. For more details, read the programming rights of ESPN TV in the first portion of this article. Many online OTT platforms carry ESPN as well.

The official ABC app allows you to watch the ‘NBA on ABC live for free and all of ABC’s other shows. The only stipulation is that you must be a network subscriber. It’s worthless to download the app to your iOS or Android device if you don’t subscribe to the network via your local, often unfriendly cable service.

Read the article’s first portion for the details of NBA programming. You will be able to access only those NBA games that are mentioned above in the TV Channel portion.

The TNT app also rescues you when you need to watch the NBA on Mobile. You can download it directly from their websites. The programming of NBA matches will be as same as that of their TV channels. Programs that are not on the official list of TNT TV cannot be accessed through the TNT app.

NBA Official app is there to stream the NBA games on Mobile. Fans can watch NBA Finals and NBA Playoffs on this official mobile app. Whether they have an android device or an iOS, the NBA app will do the rest of the job.

Depending on your preference and convenience, you can watch live streaming or replays. NBA basketball fans will be able to access the most up-to-date information as well as entertaining game clips. Fans can use the app to acquire scores, standings, stats, and schedules for the team they’re rooting for.

The NBA app also includes an NBA TV option for cable subscribers. NBA League and Playoff Pass prices start at $17.99 per month for one club and go up to $249.99 per year for all teams while avoiding commercials.

How to Watch NBA 2022-23 without Cable (Playoffs and Finals)

This is an era of online streaming. Today people have smart gadgets and love to watch their favorite games on their mobile, iOS, Android TV, X Boxes, Play Station, and much more…

So there must be ways to access the NBA matches online. In other words, online streaming services enable you to connect with the official broadcasters via its platform.

In easy words, there are the following online streaming services that you must have if you want to watch your favorite NBA games:

To watch NBA outside the US, you must access the official broadcasters. You can also access online streaming services to watch NBA Games. Here are our complete guides to watching the NBA games in different countries.

If you want to catch NBA Playoffs and Finals outside the US, follow the below steps:

Except for the United States and Canada, NBA League Pass provides access to every NBA game. Because local and national content providers have some exclusive rights to televise live games and content, blackout restrictions exist. The audio of blacked-out games will be available to listen to live.

Customers may view all regular-season games unaffected by a regional or national blackout. A blackout occurs when a game is televised locally in your area through a regional sports network or an over-the-air station.

If a game is blacked out on NBA League Pass in your location, you may watch it on your local station. When games are shown on national television, they will also be blacked out. This is true for ABC, ESPN, TNT, and NBA TV games. You may watch these games by turning them into the appropriate channel.

There are some locations where the users might face blackout issues. In other words, there may be some areas in the US where the users have to lose the telecast of matches other than their local teams. To overcome this, you can follow the following steps:

Where to Watch NBA Matches Live for Free Online

Every year, millions of people search for this query but find no satisfactory clue. There is no legal way to watch the NBA live free of cost. So I will share only those ways of free streaming that are legit and secure for you. There are following ways to watch NBA Live for free.

Use the Trial Period

So you can enjoy the free trial period if you reside in the US. The online streaming services shared above are OTT based and only available in the USA.

However, the screen-sharing service is not free, yet it will cost much less than the original cost. Streaming services do not care if you share the access password with your friend or any family member. Even some streaming services like hulu+LIVE allow screen sharing.

The Illicit Ways to Avoid

Never go for the illicit ways of free streaming, like that of Reddit and unofficial sites. Many websites are available that stream the game live, but they have no broadcasting or streaming rights. Websites like Crackstreams and Buffstreams are a fine examples of free platforms.

Never try to reach them without a VPN if you are in a first-tier country. You might get traced and then have to face legal proceedings.

How to Watch NBA on Devices

How to Watch NBA Games on Apple TV

How to Watch NBA on TV in India?

It’s available on SonyLiv. You can also watch NBA games on channels like Sony Ten 1 or Sony Ten 2, which also broadcast NBA games.

Subscription to the NBA app, one of the simplest and most expensive options, allows you to watch all games live in HD. You may also watch previous bouts here.

How does the NBA System Works?

The NBA has 30 teams separated into two conferences, each with four divisions. During the regular season, each team plays 82 games. No matter how awful a team’s record is, the top seed in each division is guaranteed a playoff berth.

Each encounter in the playoffs is referred to as a best-of-seven series. In other words, the team that wins four games against its opponent progresses. Only Games 5, 6, and 7 are played if required. To advance to the Finals, a club must win three games in a best-of-seven series against three teams from their conference and then compete against a team from the opposing league that has also done so.

It’s a regular 7-game series between a West and an East squad in the Finals.

By the way, the 7-game series is structured as follows (from the standpoint of the higher-seeded team with home-court advantage): two home games, two road games, one home game, one away game, and finally, one home game. Obviously, from the perspective of the visiting team, the home/away title is inverted.