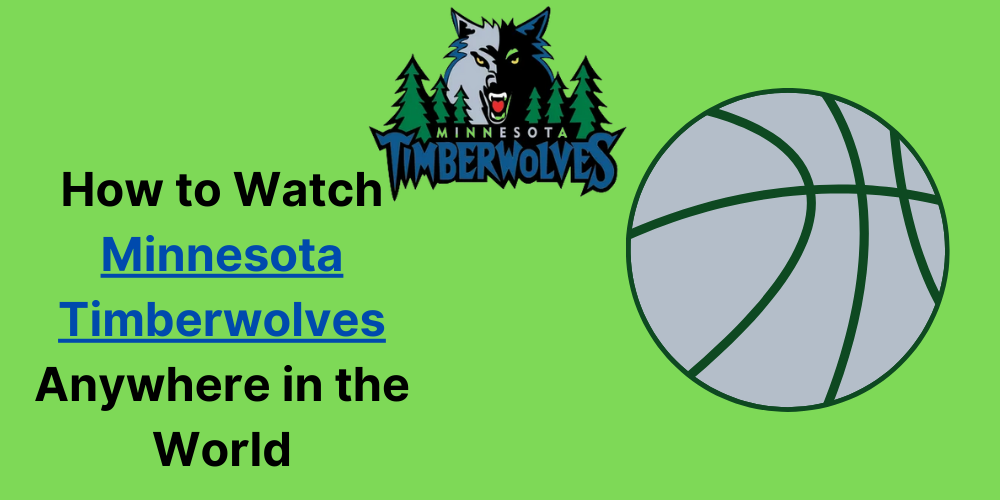 Even if they don’t have cable, fans can follow the Minnesota Timberwolves from beyond the Twin Cities. And we are here to help you solve it. This guide will show you which streaming providers offer the Wolves channels you will need. We will also discuss the key details, such as the price. Don’t worry if you don’t have a cable; the live stream will keep you updated on the excitement of the upcoming season.

How to Watch Minnesota Timberwolves without Cable

Bally Sports North is the main channel for watching Timberwolves games. It is a regional sports network that broadcasts most of the team’s games. Unfortunately, using streaming services to access Bally Sports Networks is challenging. Fans in the Timberwolves area, however, can watch the game through a digital television antenna.

The Timberwolves also broadcast games on Bally Sports Wisconsin, a Bally Sports network that’s hard to get out of Timberwolves territory. Timberwolves live broadcasts are also available on ESPN and NBA TV. These channels are nationwide in scope, making them much more accessible to fans across the country.

Because both ABC and TNT broadcast NBA games and commentary, we include both in our ratings. Do you want to know how to watch Timberwolves games online? Let’s take a look at some of the most popular streaming services to see how their channel offerings stack up against Wolves fans.

How to Watch the Minnesota Timberwolves on Hulu + Live TV

Hulu’s live TV streaming service includes several NBA-related stations. For starters, ESPN and TNT are among the 65+ networks available with Hulu + Live TV. In certain areas, local ABC channels are also accessible. Bally Sports Networks is no longer accessible on Hulu + Live TV, so the two Bally stations that broadcast the Timberwolves games are no longer available. Hopefully a deal can be reached that allows Bally and Hulu to collaborate again in the future!

Subscribers get 50 hours of Cloud DVR with the basic subscription, and can upgrade to 200 hours of Cloud DVR at any time. Cloud DVR is a useful option if you miss a live Timberwolves game and want to record it for later viewing. Original shows and documentaries are also available on Hulu. When the T-Wolves aren’t playing, watch a sports documentary or primetime drama to pass the time. NFL games are also broadcast live on NBC, CBS, FOX, ESPN, and the NFL Network.

Hulu + Live TV costs $65 a month and you can watch Timberwolves games on most smart TVs, Roku devices, smartphones, and computer browsers. Hulu + Live TV is also compatible with most video game platforms.

How to Watch the Minnesota Timberwolves on fuboTV

Another way to watch the Timberwolves online is through fuboTV, which also includes NBA TV.

You will receive more than 90 channels with a subscription to fuboTV. ESPN and ABC’s local networks, which are exclusively accessible in certain areas, are among these channels. For an additional $8 / month, you can receive NBA TV with the fuboTV add-on.

Bally Sports Wisconsin and Bally Sports North are not accessible on fuboTV. However, memberships include 30 hours of Cloud DVR, with the option to upgrade to 250 or 1,000 hours for an additional charge. With a fuboTV account, two users can watch at the same time. Three people can watch at the same time using the same account for an additional $6 per month. You can watch thousands of series and movies on the hundreds of accessible channels in addition to sports networks. If you’re a movie enthusiast, one of the premium movie channels accessible as a plug-in will include some great sports movies.

The cost of a fuboTV subscription starts at $65 a month, but can grow quickly depending on the add-ons you choose. Personal devices, smart TVs, online browsers and other devices can be used to watch Timberwolves games live. Currently, video game consoles such as Xbox and PlayStation are not compatible with fuboTV.

How to Watch the Minnesota Timberwolves on YouTube TV

YouTube, the digital streaming giant, is now offering a Live TV package with some attractive bonuses for basketball lovers.

YouTube TV has more than 85 channels. You will have access to ESPN and TNT if you sign up. Depending on your area, ABC is accessible to subscribers. For a monthly price, NBA TV can also be accessed through YouTube TV.

YouTube TV does not include any of the regional sports channels that you will need to watch Timberwolves games live online. Basketball enthusiasts, on the other hand, will like the unrestricted Cloud DVR that comes with subscriptions. That means you’ll never run out of space when recording Timberwolves games and replays! Sports documentaries such as ESPN 30 by 30 and other live events can also be recorded. In most areas, YouTube TV channels contain the majority of your primetime favorites. Also, the on-demand collection is remarkable.

After a free trial, this service costs $65 per month. Major manufacturers of smart TVs, Roku, personal devices, and web browsers are among the streaming devices that support YouTube TV. You can also watch on your Xbox, but not on your Nintendo or PlayStation.

How to Watch the Minnesota Timberwolves on Sling TV

For fans of the Timberwolves, Sling Orange is the best option. ESPN and TNT are among the more than 30 channels included in the package. NBA TV is also available on Sling TV if you sign up for the Sports Extra add-on.

Sling Orange, like the other streaming options we’ve reviewed, doesn’t include any of the Bally Sports networks that are required to watch most of the Timberwolves’ regular-season games. However, members will get 10 hours of Cloud DVR, with the option to upgrade to 50 hours for an additional $5 per month.

Sling’s Basketball Pack may be ideal for your T-Wolves obsession. Your first month’s subscription will cost you just $21 and you’ll have access to more than 40 channels, including NBA TV, TNT, and ESPN. Additionally, ESPN 3 airs all of the ABC Timberwolves games. The NBA League and the Team Pass, which allows you to watch off-market games, are included in Sports Extra.

Sling Orange and Sling Blue can be purchased individually for $35 per month. Both are also available for $50 per month. Sling TV is compatible with most streaming devices, including smartphones, web browsers, smart TVs, and Xbox.

How to Watch the Minnesota Timberwolves on DirecTV Stream

DirecTV Stream is a new streaming service from DirecTV. The platform was previously known as AT&T TV, however it was rebranded in late 2021. A high-end DirecTV Stream subscription allows you to watch Bally Sports North and Bally Sports Wisconsin, which is a huge win for T- fans. Wolves. The cheapest plan is $70 per month, however costs range from $70 to $140 per month. HBO Max and hundreds of other on-demand titles are included in more expensive plans.

ESPN, ABC and TNT are also available to subscribers. If you miss a game, just use the DVR’s 20 hours of cloud storage to record it for later viewing. Don’t have enough space to record your entire game and your weekly primetime shows? For $10 per month, you can expand your DVR’s storage to an unlimited DVR package.

Previously, AT&T TV required a two-year commitment, but now you can subscribe on a month-to-month basis. That means no price increase in the first year and no price increase in the second year! Just sign up for the plan you want, and if it doesn’t provide enough T-Wolves activity, modify it later. All major premium movie channels, including HBO Max and Showtime, are included in the high-end plans.

How to Avoid Minnesota Timberwolves Blackouts