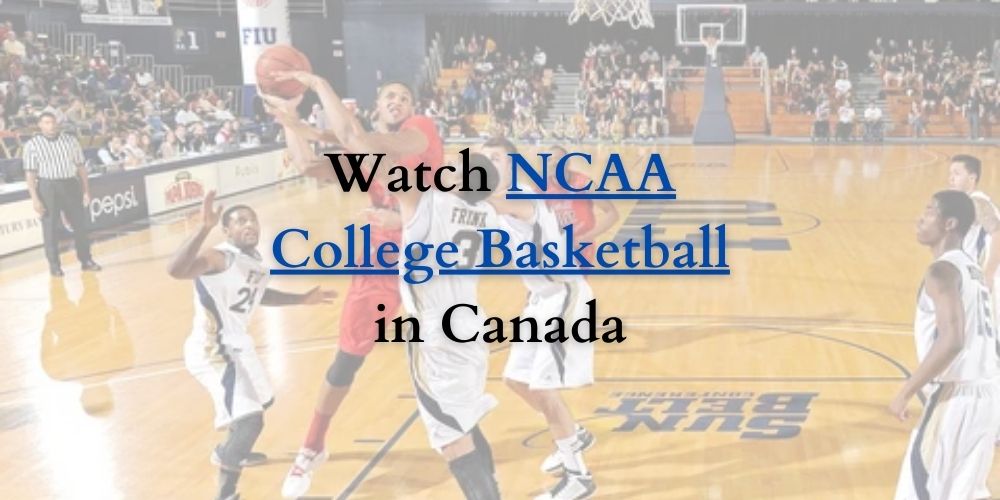 Most conferences have their own contracts. Some major colleges have separate contracts with broadcasters. It might be hard for you to find the exact stream you want with dozens of conferences and over 100 teams. Streaming pirates capitalize on this circumstance by providing illegal streaming for many popular games. On the other hand, pirated streaming services pose a security risk. For all NCAA basketball games, we recommend using official streaming sources only.

How to Watch College Basketball on TSN Canada

Since, the announcement of its network TSN3, TSN4 and TSN5 in 2014; TSN has expanded its telecasting network to more sports. Amount top notch sports like tennis grand slams, you can stream US college sports like NCAA Basketball in Canada on TSN. TSN has got the official broadcasting rights to stream live college basketball.

TSN will broadcast the NCAA men’s and women’s basketball tournaments, so get ready for March Madness. From the initial game until the National Champion is announced, all games will be streamed live on TSN Network and on TSN.ca, the TSN app and TSN Direct.

The TSN Direct streaming service costs just CA$4.99 per day or (much better value) $19.99 per month and is available to anyone, regardless of whether they already have the channel as part of a pay TV package – though existing subscribers should note that they can log in to live streams at no extra charge using their provider’s details. There’s also an app for easy streaming on the go.

For your ease, you can catch every ESPN game on TSN Canada.

How to Watch NCAAB in Canada on RDS (French Commentary)

Those French who resides in Canada can stream NCAAB matches in French commentary on RDS. RDS will be streaming most of the games that are available on ESPN. You can access RDS through your computer, tablet, mobile device, Apple TV, Samsung SmartTV, and Xbox One at just 24.99$ per month.

How to Watch College Basketball on DAZN Canada

You can watch Pac-12 network Games in Canada with DAZN Canada. This service is not available for the viewers of US. Hail to DAZN Canada for such an amazing service. DAZN will do a total damage of $19.99 a month. If you want to watch a single game, then you can enjoy a trial period and then discontinue your subscription.

If you are a great ESPN fan and just prefer to watch NCAAB on ESPN Canada, then you have options to access the network there as well. Basketball enthusiasts in Canada can tune in to ESPN Player, the network’s international streaming-only service, to watch the 2020/21 college basketball season. It costs £9.99 per month and comes with a 7-day free trial, allowing you to watch the next round of on-court action without having to spend anything.

How to Watch College Basketball on Sling TV in Canada

Sling TV is one of the best options to stream college basketball in the US. It is not possible to access all college matches through a single platform. So, you need a single streaming service that will be streaming as many as channels to cover the games. If you have sling Tv, you can watch most of the games without any interruption. Sling supports broadcast networks like ACC Network, beIN Sports, ESPN, ESPN2, ESPNU, Fox Sports, NBCSN, Pac-12 Network, SEC Network and Stadium.

How to Watch College Basketball on YoutubeTV in Canada

Just like Sling, YoutubeTV is in market to let you enjoy college football in Canada. If you are a subscriber of YoutubeTV in Canada, you can access to ACC Network, Big Ten Network, CBS, CBS Sports Network, ESPN, ESPN2, ESPNU, Fox Sports, NBCSN, SEC Network and Stadium.

YoutubeTV might not available in your area, so you will be needing a sound VPN service to relocate yourself.

How to Watch College Basketball on fuboTV in Canada

FuboTV is user-friendly in a way to watch the college football matches in Canada. This is a USA based online streaming services that is not available outside the US. But there is a way to access the fuboTV just like other streaming services.

To access fuboTV, you can go for Express VPN services that among the top notch IP serves providers all over the world.

How to Stream College Basketball on hulu+Live

With hulu+Live you can watch college basketball no matter where you are. If you are in Canada, you can access hulu+Live directly from Express VPN. Since, this is a service merely available for the residents of US, so you will be needing a VPN in order to access it on your location.

How to Watch US College Basketball on DirecTV in Canada

DirecTV or AT&T Now also offering some channels that will be broadcasting the live streaming of College Basketball in Canada. AT&T is a US based media streaming service, which is accessible to Canada through a VPN. Express VPN is one of the top notch VPNs to watch the Sports on your gadget no matter wherever you are.