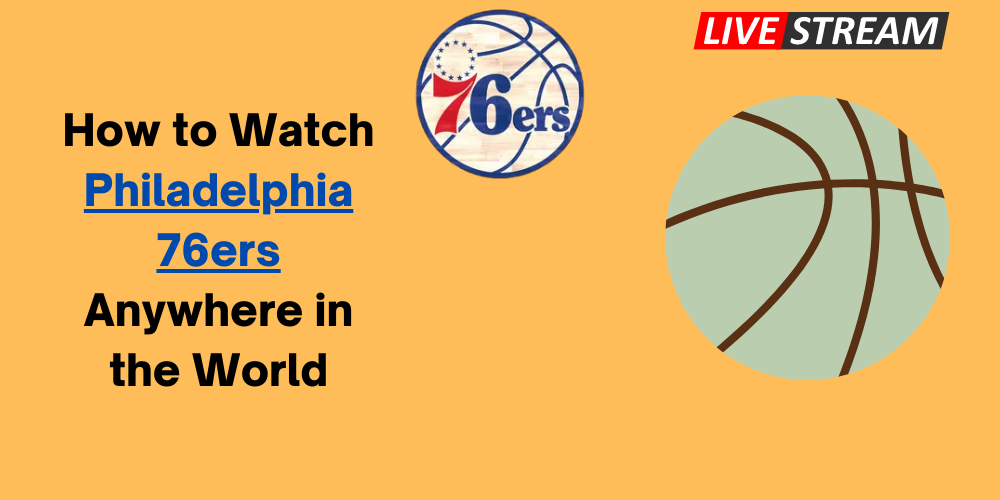 The Philadelphia 76ers (also known as Sixers) are a professional basketball club located in Philadelphia, Pennsylvania, United States. The 76ers are members of the Atlantic Division of the Eastern Conference of the National Basketball Association (NBA) and play at the Wells Fargo Center. It is one of the oldest clubs in the NBA, having been founded in 1946 as the Syracuse Nationals and is one of only eight (out of 23) that survived the league’s first decade.

We’ve got you covered if you’re looking for a way to watch 76ers games without paying for cable. Now it is easy to watch professional basketball online and there are a variety of platforms to choose from.

We’ll take a look at the best of the best in terms of live basketball streaming, examining how each service compares in terms of cost, channels, accessible devices, and more.

How to Watch Philadelphia 76ers without Cable

While access to ABC may be limited depending on where you reside, ESPN, TNT, and NBA TV are available nationwide. After that, we will compare the best streaming services for Sixers fans to see which channels are included in each package. And here we show you how to watch Sixers games on the Internet.

How to Watch the Philadelphia Sixers on Hulu + Live TV

Hulu has expanded its video-on-demand services to include live TV stations. Hulu + Live TV is the name of this service.

ABC and ESPN are also available on Hulu + Live TV, which is great news for basketball enthusiasts. However, since NBA TV is not available on this provider, you will have to go elsewhere to watch the 76ers live stream on that channel.

With a subscription, you will receive 50 hours of Cloud DVR for free. For an additional $10 each month, 76ers fans who want to record full games can subscribe to 200 hours of cloud recording.

This streaming service costs $55 a month, but you can try it for free. Smart TVs, Roku, Nintendo, PlayStation, Xbox, computer browsers, and other streaming devices can be used to watch the 76ers live.

How to Watch the Philadelphia Sixers on fuboTV

Another live streaming service that has gained popularity in recent years is fuboTV. Subscribers have access to more than 108 channels, including everything they need to watch 76ers games live, except TNT, which is no longer available through this streaming service. Please note that if you live outside of the Sixers area, regional sports networks may not be accessible.

NBA TV, which is available for a fee, is a wonderful bonus. It’s a channel dedicated to basketball enthusiasts only, so in addition to 76ers games broadcast on the channel, you’ll get additional games, coverage, and commentary. The 250 hours of Cloud DVR included with fuboTV should be more than enough for most sports fans.

Three people can watch at the same time with the basic membership, and for $10 per month, you can upgrade to unlimited screens. After a free trial, subscriptions cost $ 65 per month. Your smart TV, personal devices, and online browsers can be used to watch. Currently, FuboTV does not support video game platforms.

How to Watch the Philadelphia Sixers on YouTube TV

YouTube TV is YouTube’s live television streaming product. This service gives you access to over 85 channels, including all the channels you will need to stream a 76ers game live online. However, NBA TV may require a separate purchase in addition to the standard subscription cost, and regional sports networks are only available to Sixers fans.

When it comes to cloud recording, YouTube TV excels. The basic version includes unlimited Cloud DVR for subscribers. That means you’ll have plenty of time to record anything you can’t see live, ensuring you never miss a 76ers game.

A YouTube TV membership costs $65 a month, but you can get the first six months for $55. Sixers games can be streamed live on a variety of platforms, including smart TVs, Roku, personal smartphones, and Xbox. YouTube TV is currently not supported on Nintendo or PlayStation.

How to Watch the Philadelphia Sixers on Sling TV

Sling TV is a subscription streaming service that comes in two versions: Sling Blue and Sling Orange. Sling TV does not include the regional sports networks that broadcast 76ers games, but does offer most other stations. Each subscription level includes multiple channels, but if you want ESPN and TNT, you’ll only need the Orange subscriptions. NBA TV is also available through Sling TV.

The Sports Extra add-on, which costs an additional $11 per month, is required to view this station. It’s a wonderful value for sports enthusiasts as the plugin includes a wide range of sports-focused channels. Sling Blue or Sling Orange can be purchased individually for $35 per month, or both can be purchased for $50 per month. Personal devices, smart TVs, and Roku are just a few of the streaming devices available. Xbox users will have to look elsewhere, as will PlayStation and Nintendo users.

How to Avoid Philadelphia 76ers Blackouts